The first white man ever to set foot in Little Bear Valley (now known as Lake Arrowhead) was a fur trader, who was a partner of Jedediah Smith, in 1826. At that time, about 40 Paiute Indians, a warlike tribe, used the mountains for their hunting grounds. They lived in the high desert area. Many were finally killed in a fight with the white men of Little Bear Valley, resulting from the Indians setting fire to one of the white men’s cabins.

At the same time, a more peaceful tribe of Indians, the Serranos, lived very near Bear Valley, in an area now known as Rock Camp, on the north side of the mountain. They did not bother the settlers until one of the white men made advances to an Indian maiden, which caused a skirmish killing both Indians and white men.

The Serrano Indians lived in the San Bernardino mountain range occupying Little Bear Valley. They would take their old and sick to Arrowhead Hot Springs for rejuvenation and healing. They hunted in the beautiful and bountiful valley and lived relatively peaceful, somewhat nomadic lives descending to the desert highlands and warmer inland valleys during the winter months. 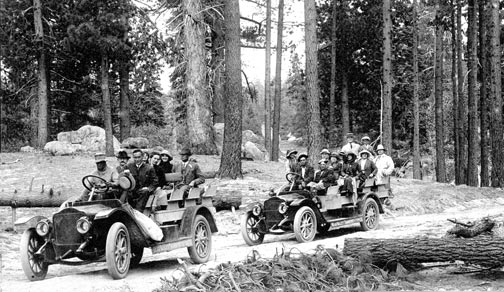 The first so-called “Mormon Road” up the mountain was built in 1852. In the 1860′s, the main attraction for the white man at Little Bear Valley was logging, lumber and cattle, and there were several saw mills in and around the Valley. White man in the Little Bear Valley was first interested in the lumber. The trees were tall and straight and cut lumber could be hauled down to San Bernardino on a road constructed through the west end of the range. 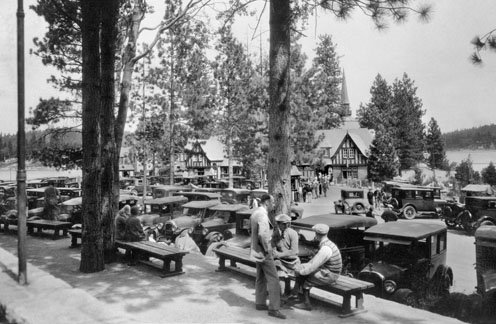 The “Daley Canyon Road” was built in 1870. Summers were productive in the Valley, but everything stopped in the winter. A few families remained during the winter months and their only diversion was to snow shoe to their neighbors (usually miles away) to visit.

In the early 1890′s Little Bear Valley was chosen as a location for a reservoir. The dam would supply water to the lowlands in the San Bernardino Valley. Work on the reservoir started in 1893. Camp I in the north end of the valley was built to house the workers. 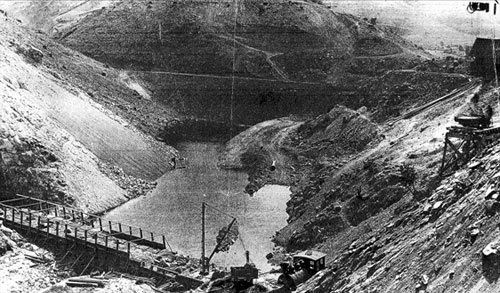 The land at what would be the bottom of the lake was cleared to prevent decay from becoming a problem and fouling the water. The dam, a semi-hydraulic fill dam was to be 200 feet high, 720 feet wide, and 1,100 feet thick at the base. In 1912 the dam was 80% complete. Work continued several more years, but legal problems rendered the dam’s diversion of water illegal. The lake behind the dam had partially filled with water, however the project was abandoned. The Company was stopped from continuing with its plan to transport water to the areas south of the mountains, and even though the lake was filling with water.

In 1891, three Ohio businessmen chose Little Bear Valley as a likely spot for a reservoir, to supply water to the southern lowlands. Land was purchased and water rights were obtained. The Arrowhead Reservoir Company was formed. In 1890, a tramway, (a cable powered device) was built from Waterman Canyon up the mountain for the purpose of transporting supplies for the building of the dam. However, engineering problems rendered it unsuccessful. Consequently, supplies and machinery were transported via the switchback road. Construction of the dam for the reservoir started in 1893. “Camp 1″ on the north slope of the valley served as living quarters and mess-halls for the workers.

In 1905, the property was transferred to a new corporation — Arrowhead Reservoir and Power Company — because the idea of utilizing the water for power had been conceived. The dam is what is known as a semi-hydraulic, fill dam, 200 feet high, 720 feet long and 1,100 feet thick at the base. It has a steel reinforced concrete core wall, embedded 20 feet in bed rock. The trees and brush were removed from what was to be the bottom of the lake, so that decay would not be a problem. The lake filled slowly from runoff.

By 1912, the dam was 80% complete, and work continued for several years after that. The plans called for over 60 miles of water conveyances and tunnels. However, only 6 1/2 miles of tunnels were completed, when it became known that the State ruled in favor of the ranchers on the upper desert side of the mountains, who relied on the water from the northward facing watershed, and passed laws which prevented the diverting of water from its natural watersheds for other than domestic use. 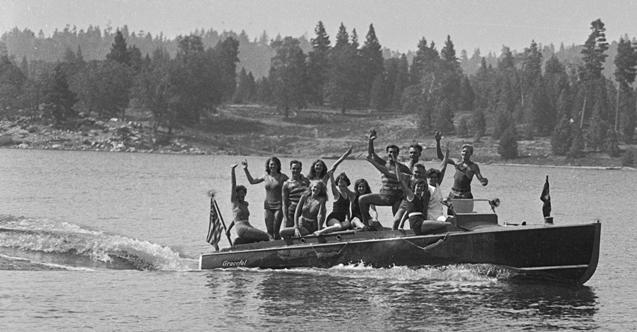 The Arrowhead Lake Company, a Los Angeles syndicate, bought Little Bear Lake and surrounding land (approximately 4,800 acres) in 1920, and changed the name to Lake Arrowhead, (deriving the name from the rock formation in the form of an Arrowhead on the face of the San Bernardino Mountain, near Arrowhead Hot Springs, which is rooted in Indian legend). Their plan was to develop the valley and lake behind the dam into a resort community. By 1923 the dam was completed and a road built along part of the north shore. A Norman style village complete with pavilion, outdoor movie theatre, restaurant and beach were constructed. Three hotels were built: the Arlington Lodge, Village Inn and North Shore Tavern as well as the 9 hole golf course.

Some of the lakeside land was subdivided and sold for private homes and secluded north shore estates. Many Hollywood stars stayed at the hotels during that era, and some purchased homes in the resort. The studios frequently used the area for locations for making films.

A domestic water system, pumping water from deep in the lake, supplied the homes, and the structures were connected to a very efficient sewer system. Strict restrictions and conditions affecting the use of land and the buildings erected in Arrowhead Woods were recorded with each tract, including the removal of trees.

During the war years, Lake Arrowhead Village was a popular rest and recuperation area for service men. Because of gas rationing, tourists were scarce. 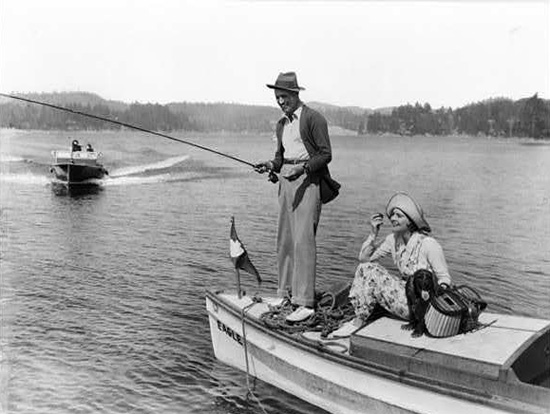 Several million dollars were spent by the Turf Club, within the first few years of their ownership, in improving the properties. There were no lots sold to speak of during the Turf Club ownership, however they made several donations of land to various organizations, such as the Boy Scouts, Girl Scouts, San Bernardino County, churches, Sisters of St. Joseph of Orange, (the builders of the hospital), and they also donated $50,000 toward the construction of the hospital. The famous North Shore Tavern was donated to the University of California and is now a popular conference center.

In 1971, Lake Arrowhead was purchased by seven businessmen from Chicago. In 1973, Boise Cascade was forced to re-acquire Lake Arrowhead through foreclosure. The Chicago group retained some of the properties not mortgaged by Boise, including some unsubdivided acreage. At the time Boise re-acquired the property, they were faced with the problem of building a new dam or lowering the lake 70 feet, due to a study required by the State to be made of all dams in California following the Van Norman Dam incident in the 1971 Sylmar earthquake.

The study found Arrowhead dam would probably be unsafe if an earthquake of 6.5 magnitude were to occur in this area. However, Boise felt that the building of a dam should be shared by all property owners in Arrowhead Woods, and legislation was passed to permit a bond issue to be voted on by property owners to finance the building of a new dam downstream. A bond for seven million dollars was passed in 1974 and a new earth-fill dam was built. A small lake was formed between the two dams, named by a local resident — “Papoose Lake.” 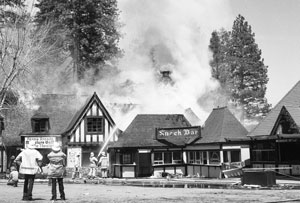 The property owners in Arrowhead Woods bought Lake Arrowhead in October, 1975 from Boise, and Boise sold their remaining holdings in Lake Arrowhead to Metropolitan Advertising Agency in 1977. In 1978, a group of investors, headed by developer George Coult, bought the Village and Lodge properties. In April of 1979, the Burn To Learn exercise was conducted by the Lake Arrowhead Fire Protection District with the San Bernardino County Fire Departments and the Air Corps taking part. All structures in the Village were burned except the original dance pavilion building, the post office, bank and real estate office.

We're always available to help out, get in touch with us any time, or shoot us an email.

Thank you for contacting us, we'll get back to you shortly.

Sorry, we are unable to send your message at the moment. Please try again later.